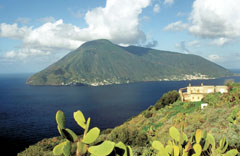 Sicily is not only the largest island in the Mediterranean Sea. And it is not only the part of Italy. Sicily is like a country. It is not only a province or a region, but the whole country with its own language, cuisine, traditions and its unique rhythm. Kindness and cordiality are appreciated here not less than money. Smile here is a symbol of hospitality.

Sicily is like the universe in miniature, like a steam boiler in which Ancient Greece and Ancient Rome were deeply mixed with Arabs, Normans and Byzantines. As a result we have a magnificent “soup” made up of masterpieces of the world architecture, the sea, the sun, the olive groves, lemons, rosemary and lots of legends, which are difficult to believe, but which are the real truth. But the word “soup” is practically not used on Sicily. So let it be “minestrone”.

We can’t speak about Sicily using a French word “a la”. This island is authentic from the roots of orange trees to the Etna crater, from the foundation of the ancient Sellinunt to the grievously known tiled Corleone. We can’t say that Sicily is like something, we may say that something is like Sicily.

Sicily is not the place for idleness. It is the place for spending holidays. Holidays on Sicily are like an enchanting sight. Here the nature starts its exciting dance of saltarello, which is continued by the antique theatres of Syracuse, the temple squares of Palermo, fishing boats of Taormina, luxurious villas of film stars and patio in the rural houses of Caltanissetta.

Sicily is considered to be one of the poorest regions of Italy. But the poor people of Sicily are different from the poor people of the other world, because they know exactly that if they leave Sicily they might be able to become rich, but surely they will lost the island which they love. Sicily is faithful to those, who are devoted to the island. That is why the people of Sicily give all their hearts to their motherland. They can’t but love this place because there are all things here, which help them to enjoy their lives.

Ports and Ferries of Sicily

Besides a wide selection of hotels or holiday homes, great camping sites are locted within Liguria. So if you a fan of unity with nature do not miss a chance to spend a wondeful vacation in Liguria.

Venice is considered to be one of the major tourist destinations in Italy. The portal www.veneto-net.com offers its visitors extensive information about the region as well as a wide array of vacation rentals available for online booking.

The simplicity of cooking is one of the distinctive features of Tuscan cuisine. However the taste of dishes can surprise even gourmets. Additional information about Tuscan cuisine as well as answers on common questions about holidays in Tuscany can be found at the portal en.toskana-netz.de.