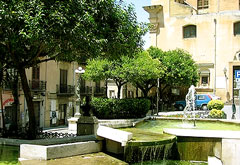 Corleone is well-known over the world. But it is an ill fame. Mafia, Mario Puzo, the author of the famous book “the God Father”, and Hollywood are the reasons of this ill fame. Today this small town in the province of Palermo is considered to be the capital of organized crime. But the things are different in reality.

Corleone today is a small quiet place with cozy squares, covered with flagstone, and with a special charming respectful attitude towards religion. The symbol of the town is Corleone Cliffs, which are located over the dwellings of the citizens and which are so great that give severe fascination to the local atmosphere. The murals on the walls of the houses are very peculiar and extraordinary. Wonderful landscapes, scenes of Sicilian life and legendary events from the history of the town are shown on these murals. Corleone is often called a town of 100 churches. There are lots of religious buildings and monuments there: the monastery of Capuchins in the Park of Villa Communalle, the Cathedral of San Martino Vescovo, the Church of Virgin Mary of the 13th century, the Church of St. Augustus of the 14th century and the Church of St. Dominique of the 16th century. Most of the town holidays are also connected with religion, for example, the procession following the God’s Coffin or the Bonfire Performance in honor of St. Lucas.

Besides great religious buildings there is located the Castle of Soprano, the name of which has become the synonym to Mafia, but the Mafia of TV serials. The Castle is situated in front of the other interesting place, the Saracen Tower on the Sottana Cliff. From that place there is a wonderful view of the vicinity of Corleone.

The tour to Corleone nowadays can be called an excursion to the places of fighting glory. There has been no peace on Sicily for the last 1000 years. For all these years Corleone has been in the epicenter of different wars. It is natural that the town has become a native place for many famous Sicilian revolutionaries. The most famous among them are Francesco Bentivenia, Fernando Fermaturi and Bernardino Verro. All of them at different times have been against the existing regime. In the 19th century Bentivenia and Fermaturi struggled against the Bourbons for the creation of the Italian Republic. At the beginning of the 20th century Verro defended the rights of peasants in their struggle against the government of Crispy.

The nature of Corleone is a special topic. Near the town there is one of the best natural parks on Sicily Bosco della Ficuzza. In the past there were hunting forests of the king Ferdinando I. They are a part of the national park now. The most beautiful place is the water cascade, which falls down a cliff and in which small river Belice flows into a stormy stream of the river St. Leonardo. The tourists should surely visit the Regional Hospital of Wild Nature. It is a unique vet centre, where ill and injured animals are cured and then prepared to be sent to their natural environment.

The topic of Mafia is still inevitable while speaking about Corleone, because the town has been considered the centre of Cosa Nostra for a long time. But for some last years Corleone has not been thought of as the stronghold of criminality. A lot of criminals have been sent to prison and now peasants grow wheat on the lands which belonged to them in the past. They make pasta of this wheat and the benefits of its selling come to the Fond of the Victims of Mafia. The vivid evidence that Mafia has been defeated can be seen in the Museum of Mafia, which was opened in Corleone in 2000. There is a great collection of printed, photo and video documents showing the struggle against criminal clans. Nowadays detectives and policemen often visit this museum and use its documents.